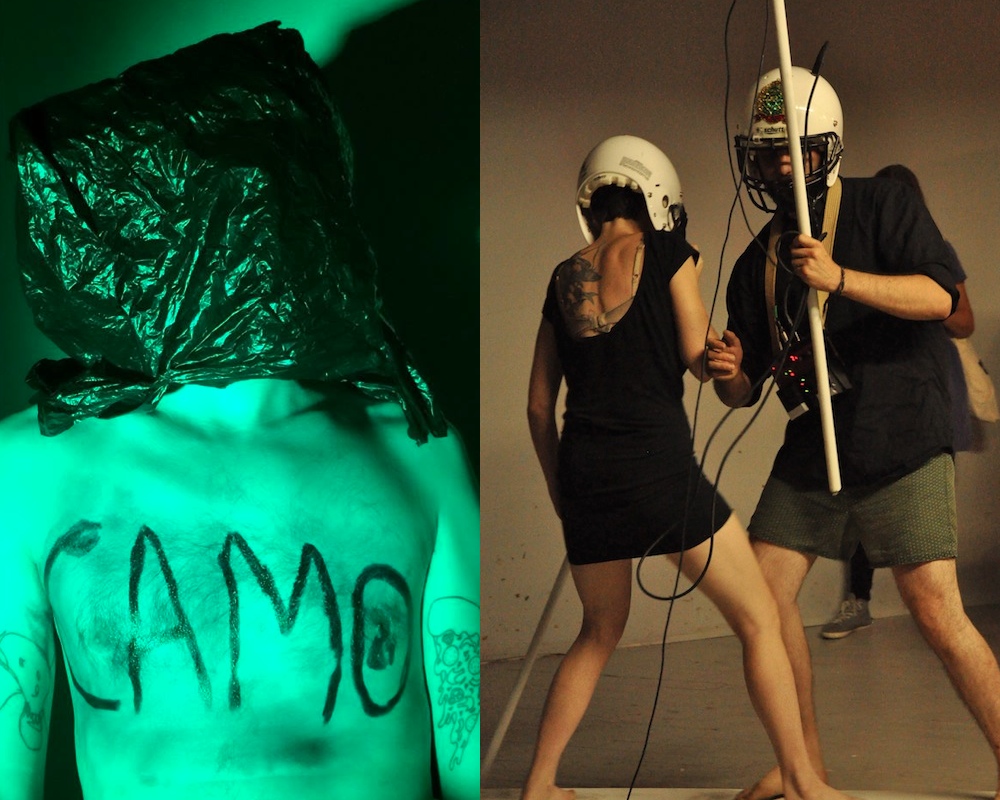 Climbing Through The Hole in the Sky

Aether Art Projects presents CLIMBING THROUGH THE HOLE IN THE SKY, a night of diverse performances by artists from around the country. Doors open at 8:30 and performances start right at 9, schedule to be announced. $10 donation at the door goes to the artists. Close to the Rhode Island metro on the red line, plenty of street parking- please respect the space & neighborhood. BYOB and bring a friend!

Esther Neff is the founder of Panoply Performance Laboratory. She is a performance artist, writer, sculptor, and curator. She makes solo performance art and is a member of the No Wave Performance Task Force, collaborating with Ivy Castellanos and Lindsey Drury.

PPL is a collective, a space, and a moniker for collaborations between Esther Neff and Brian McCorkle. Each site-and-context-specific operation theorizes philosophies of mind, modes of production, and diverse epistemic genealogies via actions, composed and queried sound, and homemade contraptions and objects. Often participatory and created in the moment with a collaborating audience, situations swing violently between the hyper-structural and the indeterminate.

Forged from the figurative beauty that the body provides, FUTURE DEATH TOLL (David Griess and Edward Sharp) aims to introduce work that uses light, sound, and movement as a metaphorical stand-in for issues like mortality, death, diseases, prison as a corporation, intellectual property rights, bdsm, and subjective destitution. Pondering questions like: how can we make performances with people not in the same room? would that also work for several performers in several different places? would this create or fill a void? how can this engage the public? what’s the most minimal amount of material required to conceptually encapsulate the relevant point? how can we heighten the sense of the present? how are we going to choreograph these disparate movements? These questions become fodder for communication & collaboration between a small, but by no means exclusive, group of performers. Poems, trash bags, heavy breathing, sweat, hair clippers, and orange provide transcendent beauty in an otherwise somber landscape.

Rachel Hrbek is multidisciplinary artist whose work focuses on utilizing the body through performance and video art. Originating from the Midwest, Rachel received her B.F.A. from the Corcoran College of Art and Design in May, 2013. Her work has been exhibited through out the Washington, D.C. area, as well as in New York, NY and Cleveland, OH. She currently lives in Philadelphia, PA.

Natalia Panfile (born in Moldova, lives in Baltimore, MD) completed her undergraduate studies at Maryland Institute College of Art (MICA) in 2006 with a concentration in performance. In 2007 she went to pursue her MFA at University of Maryland Baltimore County's (UMBC) Imaging and Digital Arts program from where she graduated in 2010.

Natalia is very much influenced by her own experiences as a woman who grew up in Moldova and who now lives in the United States. Her research has been on personal and cultural interconnections among concepts of cleanliness, purity, motherhood, and motherland— specifically, her native Moldova. Performance is a pertinent aspect of her art as the memories of her lost past live through her body and emerge through the act of performance.

Interdisciplinary artist Renée Regan performs regularly around DC, through organizations and independently as public interventions. Though her background is in photography, she has developed a vocabulary of personal actions, creating charged and affecting performances.