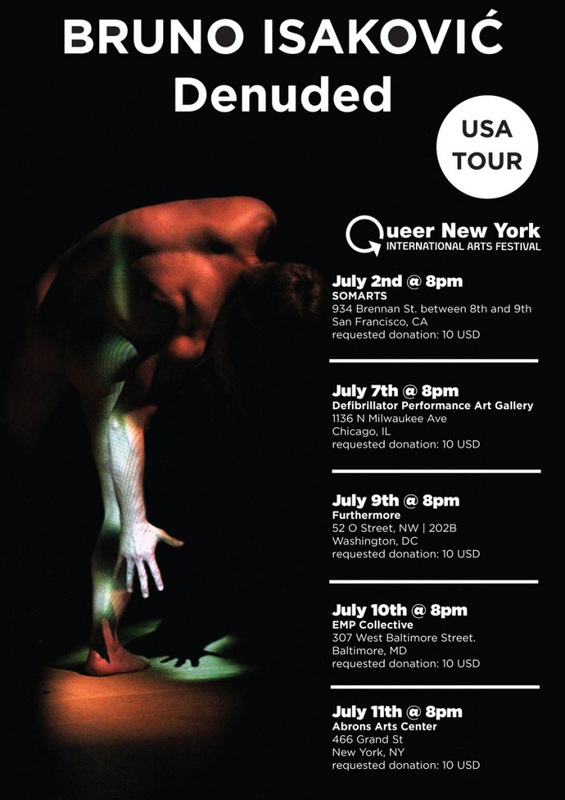 
Denuded was created during BRUNO ISAKOVIĆ and PAVLE HEIDLER’S artistic residencies in Art Workshop Lazareti in Dubrovnik, through the Perforations program and the Performing Arts Network. The idea of Denuded is born from the framework set by the previous Isaković’s work Invocation, in which the performer with physical expressions and stage presence that goes far beyond the purely physical movement, reminisces of the relationship between the secular and the spiritual. The performance Denuded continues this research and deeply touches physical transformation, thus freeing them from the automatic attribution of meaning to what we at a given moment are able to see, recognize, experience. photos by Darko Vaupotić.

Denuded requestions the relationship with the audience through a feedback loop that causes a significant transformation of the artist’s body. In this new version of his performance, Isaković bypasses classical staging and sets his body in the middle of the auditorium, thus opening new sculptural aspects of performance and capabilities of communication with the audience.

After playing in Korea, Japan, the US and Greece, Denuded continues its international performance tour in the United States in July in New York, Chicago, Washington D.C., Los Angeles, and San Francisco. Announcing select upcoming performances in Brazil in October, and a tour in Australia in February and March 2015.

Bruno Isaković was born in Zagreb, and graduated in contemporary dance in Amsterdam. In Zagreb he is a member of the Studio for Contemporary Dance, collaborating with numerous choreographers, a freelance choreographer, and holds dance workshops. 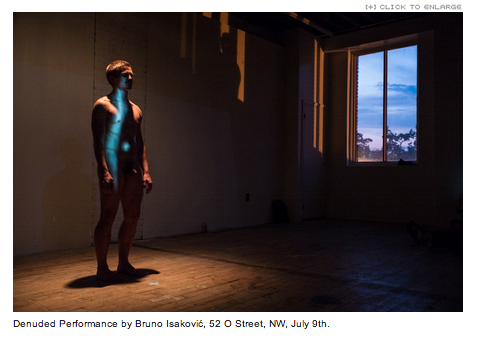 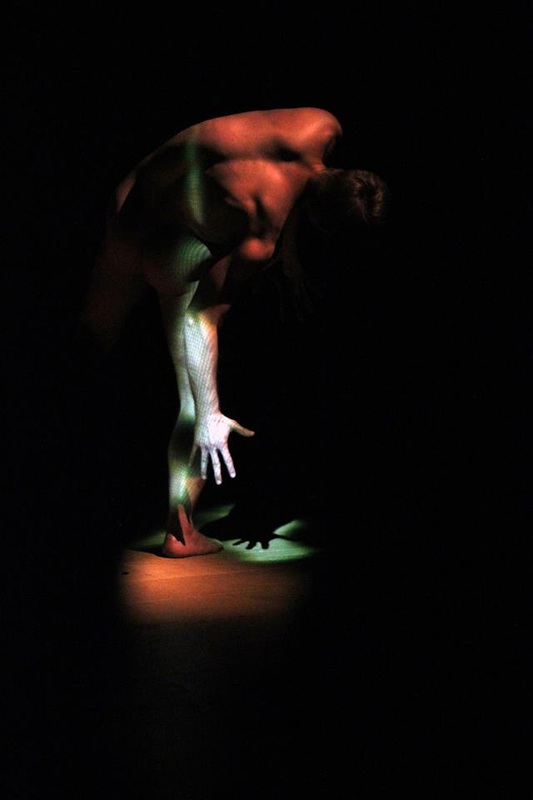 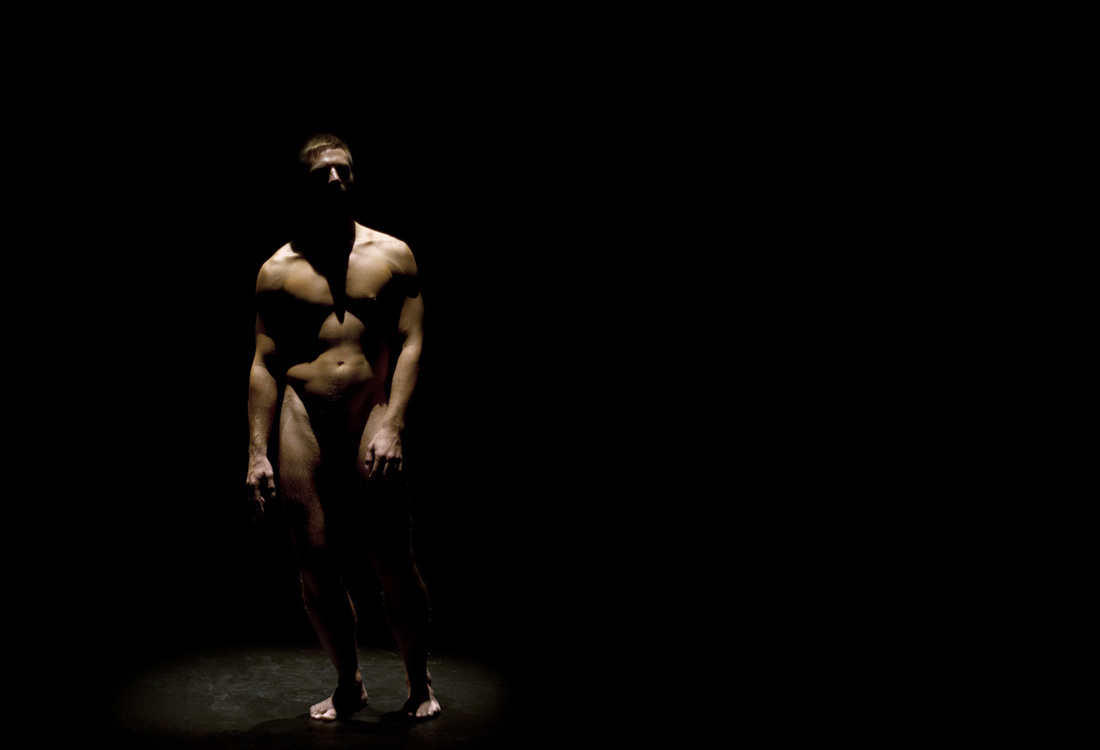 Pussy Noir is the stage and nightclub persona of performance artist Jason Barnes. A performer since the age of four, Jason has combined his formal training in stage and voice with his love for fashion and the avant-garde.

Pussy Noir is “more gender fuck than drag.” She is not a diva or a queen, she is a distinct and uninhibited voice. She bathes in layers of contradictions from stilettos to poodle skirts. She provokes and incites the crowd. And, when all is said and done, what’s left is nothing but a boy in heels. Skin to stage.


Kunj is an interdisciplinary artist based in Washington, D.C. His work focuses on hetero-normative dissuasion through the use of American and Hindu ritual. Questioning and rebelling institutional ideas for cultural optimism. These pseudo-installation pieces always leave an imprint or aftermath. Remnants of emotional or sensuous interactions with the materials used. His performance art explores the notion of no-identity versus new-identity. In the past, Kunj has shown his work at venues such as Grace Exhibition Space, The National Portrait Gallery, Hole in The Sky, and Black Whiskey.

John is presenting a teaser of Jarman (All this Maddening Beauty), a performance inspired by the work of queer filmmaker Derek Jarman.


about DENUDED by Bruno Isaković


The performance Denuded began its development in August 2013 during an artistic residency by Bruno Isaković and Pavle Heidler in Art Workshop Lazareti in Dubrovnik which was part of Perforations Festival and Croatian Performing Arts Network. Numerous subsequent presentations of this show contributed to the development of the performance which also allowed the performing method used in the creation of Denuded to be further defined. The developed physical mechanisms are based on relationship between breathing and physical tension and ways in which that relationship permeates the body in each moment.

The body in itself already produces certain tensions which are accumulated through life. They remain imprinted and memorised within the body of any person and they become characteristic to that person in ways in which one thinks, feels and acts. These tensions are swaying through the body in moments of pleasure or discomfort, they are being created through posture, conditioned by psychological backgrounds, excitement, fear, restlessness or stress. The body constantly communicates the current condition of any one person, and confronted with the gaze of the other person it has the ability of a certain mimicry and deceit by keeping up with tensions in emphasising messages we are bound to read stereotypically as prone to a specific body (for example an emphasised macho or feminine postures). And the same time, the process of breathing is adjusted to all of the above and makes the manipulation of tensions possible. If we concentrate on relaxed breathing we are sending a message to the brain to calm and relax, and it in return sends the same message to the body to start the process of relaxation. In the same way when we are anxious or stressed we tend to keep our breath. The body therefore constantly finds itself in a closed circle of interdependence of breathing and tensions.

The performance Denuded sets these two organic body functions within the performing moment and uses gradation of their interdependence to radicalize, confront and neutralize them. Tensions accentuated to their extremes, halted in suspension of breathing in or breathing out and transformed repeatedly into states of relaxation brings the body into new neutral positions which create physicality that deconstructs and translates meanings out of constant transformations of the body and its need to relax, reactivate and be conscious. The body sometimes works for itself and sometimes against itself, within different intensities of its own transformation.

This solo can be viewed as choreography derived from a detailed path of performer’s attention that produces set of mental and physical tensions. The agent of the transformation is the breath, that basic connection between outer, public realm, and inner, personal, invisible. In words of Salman Rushdie: We inhale breath, and exhale the meaning. Denuded questions the radicalisation of performer’s exposure via long stillness of denuded, one that invites the spectator to focus the gaze on the details of the body. This gives provocatively close insight into someone else’s intimacy, in the body of the other, by the gaze. We can, as spectators, refuse and leave and disturb the basic convention of theatrical behaviour, we can drop the eyes and stay at the distance, we can agree. The gaze of performer, in this case mute and fragile attempt of collaboration, the strategy of mutuality, opens the corridor for the performance, in which we elude the objectification of performers body. We enter in the game of Denuded without a distance, without the tensions of the power, as mutual meditation on display or exposure in which the relation of performer­ - spectator is in balance, in dialogue. All associations that stand out from the movements of the performer, whether emotional, social, archetypical or artistic are open and possible. However, they are in constant transformation of the image, distortion of the shape. The body is permeable, as well is the process of watching. As the performers expose themselves in their performance, the associations awakened in the spectators’ minds open the realm of their intimacy. So the dialogue is fulfilled.

If we escape our need for intimacy as a safety­ net of known associations, the performer’s body in Denuded becomes infinite landscape, shape, pulsation of energy, condensation of transience a detail totality an organism. It ceases to be linked for and identity as an expression of personality, it becomes pure bodylines, a reason for its own existence.

Quoting Foucault: The body is cruel topia, always here, never somewhere else... never under some other sky... By the choreography that is built on the accumulation of the intensity of breath and muscular tensions, in the space reduced only on the volume of the body, generated tension collapses in its origin. In the body itself, in the space where it started. The body becomes the pure accumulation of energy and power, universal being and simple rhythm. It is its own limitation and ending, unbearably aware of itself, in the combat with itself, with its inner force that drives it to intensity. Not anymore in control of the elaborate choreographic labyrinth, or performer’s dedication.

What happens when the body can't stand itself anymore? Forced upon it, there is a choreographic prohibition of refuge in the space, in speed, in voice or giving up. In Denuded, it comes back to itself as simplest fact of existence, the neutrality, the balance between the identity and the organism. It assembles its experience; renews its own liveliness, waits for its next inhale.